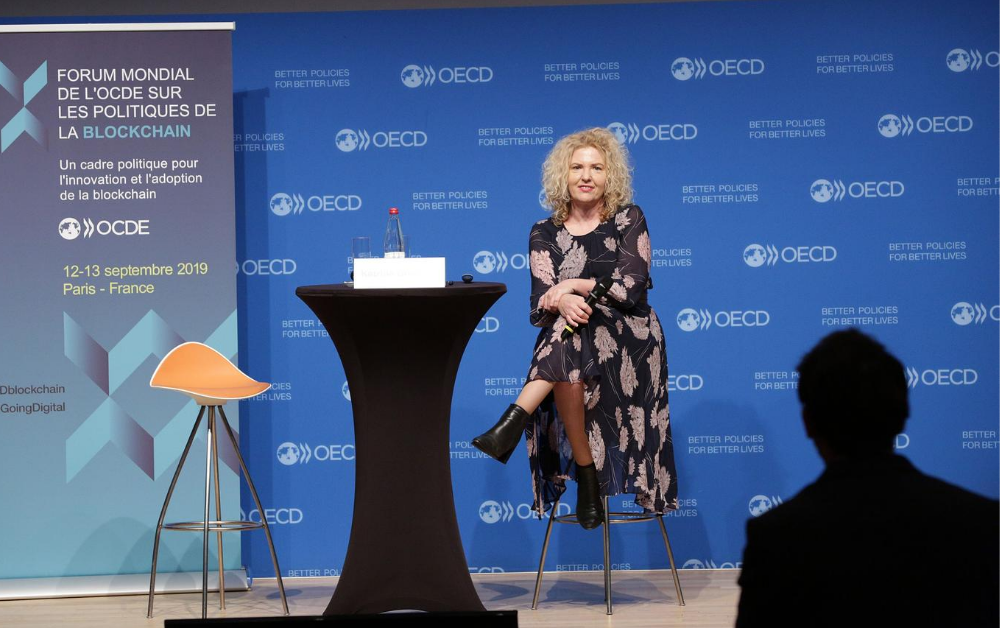 It sounds very cliché but finding your voice and speaking with authenticity is important.

Q. What is blockchain and how is it useful to the community in an emerging digital age?

A. Blockchain is a type of software made up of records of digital transactions that are grouped together into “blocks” of information and shared securely across computers on a distributed network.  When new blocks are added, it is connected or “chained” to the previous block, making it difficult to change past information.  You will often hear the words “transparency” and “trust” associated with the blockchain technology.

Blockchain technology is different to centralised databases for four reasons:

The digital era is both exciting and concerning because of data.  Every time we go online, our data is collected by government and industry (think Facebook, Google, Amazon) and with the application of powerful algorithms our online identity is catalogued and tagged into centralised databases and turned into a valuable commodity.  Also, we have fake news, counterfeit goods, contaminated supply chains, climate change and trust in our institutions such as governments is very low.

We now have a thirst for knowing where products come from, we want a better digital experience, we want to know that our data is secure and private.

Blockchain is one tool in the digital tool box and is very powerful when applied in way it was intended to.

Q. You are working in a new field people don’t fully understand. How digitally savvy were you at the start? What led you into blockchain?

A. I am a Gen-Xer so I remember when Apple, Microsoft and the internet emerged – we had Yahoo and AOL browsers (no Google or Facebook!) as well as signing up for my first email account at the age of 23 as a post graduate student at Griffith University.  So, I have had to constantly keep learning, trying new technologies, and adapting as technology became more central to our lives.

I wouldn’t say that I was digitally savvy, but rather a healthy dose of curiousity.  When you are curious, you are more inclined to ask questions of the status quo – “why does it work that way?”, “how can I take a different approach?” and so on which leads to discovery and exploration.

We have a question in the blockchain community – “when did blockchain find you?” Interestingly, it does find you rather you finding it.

Almost five years ago I quit my job and joined a startup.  It was during my time with this startup that lead me to blockchain.  We were asking questions about identity and I noticed Bitcoin was the media and one day at my children’s public library I found a book about Bitcoin and took it as a sign.  I checked the book out, read it and a light in my brain was turned on.

Again, my curiousity lead me to several discovery points which made blockchain technology a very compelling proposition for me to pursue.

Q. Being a female leader, what do you do differently that works, and others could learn from?

A. It sounds very cliché but finding your voice and speaking with authenticity is important.

Q. You have been a Female Fintech Leader Finalist and been appointed as an Australian Blockchain Fellow. When did your industry bring out awards to recognise females in your industry? (Bernice, Southport SHS)

A. Our industry associations – Blockchain Australia (formerly the Australian Digital Commerce Association) and Fintech Australia – are less than five years old and each have made enormous contributions to advancing innovation and amplifying our technology startups and scaleups.  Fintech Australia had its first awards in 2017 and Blockchain Australia in 2019 – recognising female leaders is an important dimension to these awards as it puts a spotlight on our industry’s diversity.

Q. Why do you think your industry developed these awards to highlight women’s achievement in financial technology? (Bernice, Southport SHS)

A. Up to December 2019, I was a Blockchain Australia Board Member and very much involved in establishing the categories for the 2019 Inaugural Blockchain Australia Awards.  For me, it was critical that there was a dedicated category to recognise and celebrate women’s contribution to advancing blockchain technology in Australia.  It may not be general knowledge, but some of Australia’s most impactful blockchain startups have been founded / co-founded by women.

Everledger’s Leanne Kemp, who is also the Queensland Governments Chief Entrepreneur, Bridie Olsen with Geora (a joint venture with Agridigtal – founded by Emma Weston), Jane Thomason who is also the Inaugural UN Woman of the Decade, Ruth Hatherly, Founder of MoneyCatcha, Dr Jemma Green, Co-Founder Powerledger, Katryna Dow, Founder of Meeco to name but a few.

It is important for those women looking into our industry see themselves looking back – to see women who are active in building with technology rather than seeing women as passive consumers of the technology, I hope, incentives women to have a different inner conversation with themselves.  Instead of thinking “there is no place for me”, they find their own place in the industry and start building!

Q. What subjects and courses led you into this career? Or was it another influence? (Emma, Babinda State School)

A. I wasn’t a well-behaved high school student, so I quit high school after Year 11 and went to TAFE to do a Business Course which I found interesting but not challenging – I remember one subject was Retail and we had to learn how to operate a cash register – yep, it was the 80s – horrible!  Eventually I returned to school as an Adult Student and completed Year 11 and 12 in one year which then gave me the entry score to go to Griffith University.

Whilst I was not sure what I wanted to do, I ended up enrolling in a Bachelor of Arts (Humanities) where I studied Culture and Politics, Women, Gender and Society, Political Theory and Ethics.

I loved university – I finally found a place where my curiousity was encouraged – demanded even! Humanities gave me so many important skills that I still use every day.  I learned how to write, to publicly speak, to listen, to form an argument, to apply critical thought, to question and analyse information, and most importantly to take abstract concepts and translate into tangible frameworks to build new knowledge.

In my early 30s, I completed a Post-graduate Certificate in Entrepreneurialism and Venture Development again at Griffith University which was a brilliant decision.  It learnt new skills to commercialise ideas, basic accounting, and financial literacy giving me the courage to attempt my first startup – which did not end well!

Armed with both an Undergraduate and Postgraduate education coupled with my career choices – I started working in government and through different roles, gained experience and confidence. I also worked in several other sectors which then lead me to here.

Q. As we move further into digital services how do we still protect older people without access or skills for the modern world?

Q. You are originally a sociologist, how has that helped you working in teams with software engineers and others with business backgrounds.

A. The key is to ask what is the problem that needs to be solved.  When you start with the right problem, then teams work better because they understand the goal.  Also, adopting an Agile methodology coupled with Radical Candour, ensure that the team’s skills and experiences are optimised regardless of their backgrounds.

Q. With the current COVID-29 global crisis, can we use technologies to solve traditional problems? What industries do you think will change forever (banking, shopping)?

A. The first thing technology solved was how to move entire workforces from the office to the home, how to deliver education and health care, food, and essential supplies.  We have been using technology to solve traditional problems for decades, it is only when we must adapt that we accelerate our adoption. Every industry will change forever; even governments – but new industries will emerge.

Q. You’re an entrepreneur who looks at others’ ideas – what is your advice for deciding if an idea has real potential?

A. If you have an idea, the first thing you do to test its potential, is ask your intended customer whether they will pay for your idea and for how much.

If your intended customer says yes, then build bullets not cannon balls – this means, prototype and iterate fast – we call this pivoting.  You don’t build the perfect product first or you will find that your market has moved on.

The third piece of advice is that people build great companies; ideas are the fuel to enable people to do great things together.

As CEO and Co-Founder of Civic Ledger, Katrina’s vision for a future government will be an operating system for industry and start-ups to innovate and believes that shifting to the digitisation of government services and programs will fundamentally change the way we value, share, consume and hold public assets such as civic entitlements.

Katrina’s experience as a career bureaucrat, not-for-profit executive and a blockchain industry mentor adds a wealth of knowledge and experience to lead Civic Ledger application of emerging technology will help solve traditional problems.

Her ability to translate complex technology into language understood by Government and Business Leaders, has driven Civic Ledger’s piloting of blockchain use cases within government.

In 2018 and 2019, Katrina was recognised as a Female Fintech Leader Finalist and Female Blockchain Leader Finalist by her Industry peers and in 2018, Civic Ledger was named as Australia’s Emerging Fintech Company of the Year.

In 2019, Katrina was appointed as an Australian Blockchain Fellow in recognition for her contribution to the responsible adoption of blockchain technology both in Australia and globally.

Katrina is a Humanities undergraduate and has a postgraduate in Entrepreneurism and Venture Development and believes that STEM has room for the creatives, the philosophers, the problem-solvers and the story-tellers.